after a mighty long hiatus, we’re bringing drew’s nerd moments back with a new format and a new co-host, the one and only paul blann, in his first episode we’re reviewing the very portable iphone stand called the crabble from seskimo

you can find the show over at nerdmoment.com
you can subscribe to this feed
or subscribe with itunes

DNDS-854 – we’re trying to help showbiz author a.k.a. scott sigler sell out his 3000 copies of The Rookie, use the code DREW at scottsigler.com/therookie and save $3 in the process. other topics are bea arthur, grey gardens, new prints from dawn in the works, large format printers, huge genitalia, lisa rinna in playboy, and cougars. we end with another plug for scott because he totally deserves it. please buy his book. 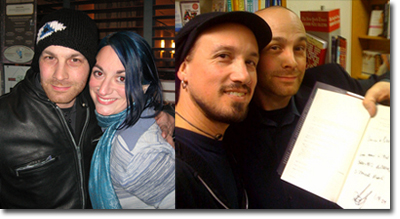 $3 off Scott Sigler’s THE ROOKIE 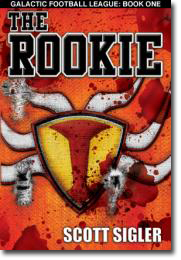 long time friend of the show, Scott Sigler, is publishing a limited amount of hardcover copies of his awesome galactic football novel, The Rookie. we’re able to offer you $3 off if you use the code DREW when you place your pre-order.

Set in a lethal pro football league 700 years in the future, THE ROOKIE is a story that combines the intense gridiron action of “Any Given Sunday” with the space opera style of “Star Wars” and the criminal underworld of “The Godfather.”

Aliens and humans alike play positions based on physiology, creating receivers that jump 25 feet into the air, linemen that bench-press 1,200 pounds, and linebackers that literally want to eat you. Organized crime runs every franchise, games are fixed and rival players are assassinated.

Follow the story of Quentin Barnes, a 19-year-old quarterback prodigy that has been raised all his life to hate, and kill, those aliens. Quentin must deal with his racism and learn to lead, or he’ll wind up just another stat in the column marked “killed on the field.”

DNDS-853 – a happy hovel update about a hole in the roof, patched with the help of a husky stud, then dawn gets all scientific on us with a few interesting audible realizations, lightning, and the scratching of butt cheeks. we also introduce our newest sponsor, Squarespace, use the code “dawnanddrew” and get 10% off for the life of your account.

DNDS-852 – as we celebrate 4/20 today dawn tells us one of her seattle stories and gets a lesson about the term meme, we also learn about a study that seems to have a bunch of liars in it about whether they’ve had sex in the shower. call 206-666-3825 and tell us if you have or not. we also welcome a new sponsor, VaporStore, use the code 420 and get 10% any order (through noon 4/21)

music:
ziggy marley with into the groove

BJ and Megan are trying to get back home to Australia and along the way are going to show us around Barcelona. when you’re done, go check out BJ’s new video project over at fortheinsane.com

DNDS-851 – we have a very interesting discussion about death and donating organs and donating your body to science after you die since dawn is reading a book called stiff, then we talk about guillotines for a little while before dawn explains that she thinks she figured out her passing out problem, and that it’s called ménière’s disease

this final installment is simply a short video showing you the beauty that is Play Cocles, in Costa Rica. help us make our dream come true! and then come down and visit us!!

DNDS-850 – dawn’s sister christy is back in the studio to give us an update on what she’s been up to, including her new job that’s taken her from iceland to belgium, and from san diego to turdistan. she also confirms a tragic pact that she has with dawn that may or may not include fire.

DNDS-849 – dawn is finally back in the studio with so many stories from her rasputina adventures! it’s going to take quite a few shows for her to tell us all of them and this episode she barely gets us to the part of her trip where she meets the band at the seattle airport. this episode also features another brand new intro from our good friend christian. welcome home dawn!